As part of new exhibit, Chance shares how Peanuts impacted his life

When it comes to Charles Schulz’s classic Peanuts comic strip, there is likely no greater authority on the subject in Stanly County than Jeff Chance.

Ever since first discovering the comics as a young child, the former Stanly County school board chairman has developed a lifelong passion for the Peanuts gang, amassing hundreds of items, including figurines, lunchboxes, ornaments and books. He has also taken much of the franchise’s core lessons, such as persevering through adversity, to heart as he has battled through his own tough times.

He estimates he has laminated hundreds of comic strips that he keeps under file at his home, each with significant meaning. Chance said he always enjoys wrestling with the theme of each cartoon, especially when Schulz was writing them.

“I think everything Schulz did was probably very meaningful and if you really take the time to dig into it, there’s a particular point that he’s trying to get across in every one of his comics,” he said.

To help celebrate the holiday season, his many trinkets will be featured as part of the “Charlie Brown and All the Gang” exhibit at the Oakboro Regional Museum of History beginning Thursday from 5-7 p.m., when it reopens to the public for the first time since the COVID-19 pandemic.

The exhibit will be on display through at least January, Chance said, though people will need to make appointments following the event Thursday.

Seeing himself in Charlie Brown

Chance’s first exposure to Peanuts came in 1967 when his parents first gave him the book “You Are Too Much, Charlie Brown,” which featured some of the series’ more notable comic strips.

Since his dad worked as an electrician with the Charlotte Observer, the family received the paper each day and Chance always gravitated to the comics section.

To this day, he still is an avid fan of the comics. 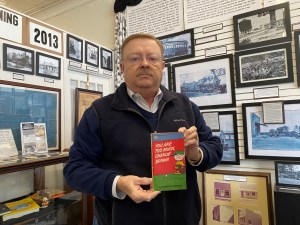 Jeff Chance has loved Peanuts ever since his parents got him a book comprised of comic strips when he was a child.

While he read other comic strips, nothing impacted him quite like Peanuts, which first began publication in 1950. As a young child, he quickly identified with Charlie Brown, arguably one of the most ubiquitous characters in all of American culture, and saw many parallels between the many struggles Charlie Brown went through and Chance’s own upbringing.

The main character of the comics, Charlie Brown often is meek and seen lacking in self-confidence. He is unable to fly a kite, win a baseball game or kick a football held by his frenemy Lucy, who always pulls it away at the last second.

Growing up in Albemarle, Chance described himself as a nervous child who struggled to make friends and dealt with issues of anxiety. As a young kid, he didn’t feel like he was necessarily well-liked or that he related to many of his peers.

But even during the tough times, there was always one constant he could fall back on.

“I always kind of related to Charlie Brown,” Chance said, referring to the character as an underdog, which he also viewed his younger self as being. “He is one of these kids that he wants everyone to like him, but no one really does initially. But in the end, he tends to do something that brings everyone around.”

He also seems some of himself in Snoopy, who is prone to imagining fantasy lives, including being a college student and a British World War I flying ace.

“He’s a unique individual,” Chance said. “He just kind of does his own thing.”

Helping him through tough times

Some of Chance’s favorite comics strips concern Charlie Brown’s failed attempts to fly a kite. Despite all his best efforts, even seeking advice from others such as Lucy, he can never quite get the kite to stay in the air.

One of the abiding lessons Chance has taken from Charlie Brown’s many struggles — whether it be the kite or the many failed attempts to kick the football — has been to continue to persevere, despite the many obstacles that might be in the way.

A key theme within the comics as a whole which Chance appreciates is the notion that whatever life throws at you, “in the end, you can always come out on top. Maybe you didn’t get what you wanted out of it, but you still got to the end of the road and everything worked out.”

Just like his hero, Chance has experienced his share of life’s struggles, most notably in 2018, when he was hospitalized with double pneumonia. Both his kidneys and lungs shut down and doctors had to perform a tracheotomy so Chance could breathe.

Aside from his family, which was his major motivation for wanting to get better, another key inspiration was his beloved Peanuts.

“The whole mindset of Charlie Brown was that he never gave up and I wasn’t going to either,” he said, noting he thought about Peanuts often during his time at the hospital.

On his 59th birthday, while he was still recovering and preparing for rehab, his wife Sandra surprised him with a custom-made Charlie Brown cake from the Albemarle Sweet Shop, complete with figurines on top.

“It was awesome, it really brightened my day,” he said.

Peanuts as a unifying force

When it comes to Peanuts, Chance has always loved the 1965 classic “A Charlie Brown Christmas.” He has it on VHS, on DVD and watches it every year on television.

Though he’s seen in countless times, he is still always moved by Linus’ speech regarding the true meaning of Christmas and Charlie Brown’s friends helping to decorate his tree. Though simple messages, they are still very powerful.

“That is without a doubt, the greatest cartoon of all time,” he said.

And while many comics nowadays often portray a certain political bent or point of view, he said, the magic of the Peanuts is that it’s a property beloved by so many, regardless of political party or any other affiliation. Chance refers to it as an apolitical cartoon.

For this holiday season, Chance hopes people will gather to watch the Christmas special and take in the important messages that come with it.

“I think if you go back to the lessons of the Peanuts characters and what Schulz is trying to get across, if we were all to come back to that mindset of getting along and helping each other, irrespective of your political thoughts, I think we’d all be better off,” he said.